The Triplets suffered their first loss of the season Sunday in the Sprint Center at the hands of the Power. Al Jefferson scored 14 for the second game in a row, but the Triplets fell 50-47 against the defending champs.

The Triplets, with four wins and one loss, now find themselves in a three way tie atop the standings with the Power and the Killer 3’s.

The defending BIG3 champion, Power, jumped out to an early 21-8 lead in the first half, but the Triplets cut the lead to 6 with a 11-4 run to end the half, which Big Al started with a layup to cut the Power lead down to 11. The Triplets headed into the locker down just 25-19 at the half.

Down 6, the Triplets got into a groove early in the second half. “Iso” Joe Johnson began the half by nailing a step back jumper, which was followed by an Alan Anderson bucket.

With the deficit down to two, Big Al intercepted a pass from Corey Maggette and laid it in to tie the game and Jefferson gave the Triplets their first lead since they led 4-3 with a free throw on the ensuing possession. 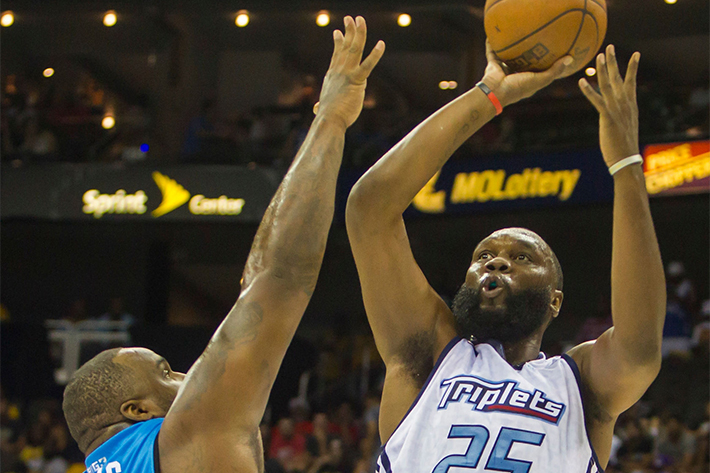 The Triplets held onto the lead until Maggette drove by Iso Joe and laid it in to give the Power the 33-32 lead, and unfortunately for the Triplets and Big Al, the Power would not trail again in the game.

Anderson nailed a three for the Triplets to tie the game up at 39, but Julian Wright provided the Power with a spark off the bench as he scored five straight points to put the Power up 44-39.

Maggette took the reins from there, scoring on back-to-back possessions with a free throw and a layup to put the Power two points away from the 50-point mark.

Down 48-45, Big Al pulled the Triplets to within one by floating it in off the feed from Johnson. The reigning MVP, Maggette, called game on the next play with a jump shot from just inside the three-point line.

Next weekend, the BIG3 travels to Salt Lake City to play at the Vivint Smart Home Arena, where Big Al called home throughout his three seasons with the Utah Jazz. The Triplets will battle the struggling Ball Hogs, who are led by Brian Scalabrine and Josh Childress. It will be a good chance for Big Al and the Triplets to get back on track as the Ball Hogs have yet to win a game this season.

Tip-off for the BIG3 this weekend is scheduled for 9 p.m. ET.