Al Jefferson and the Triplets won their fourth game in a row on Sunday at the Barclays Center. Big Al matched his season high with 14 points, and he doubled his previous season high in rebounds with 10 boards as the Triplets defeated Tri-State 50-37.

After the Killer 3’s loss to the Trilogy, the Triplets are now the only remaining undefeated team in the BIG3.

The Triplets took an early 2-0 lead as Big Al scored the first bucket off of a nice feed from Sergerio Gibson, and the early lead held up all game as the Triplets never trailed in this one.

Big Al finished the half with four points and Joe Johnson finished with three, but both broke through in the second half to finish off Tri-State.

Tri-State tied the game at 30 early in the second half, and then Johnson and Jefferson took over the game. 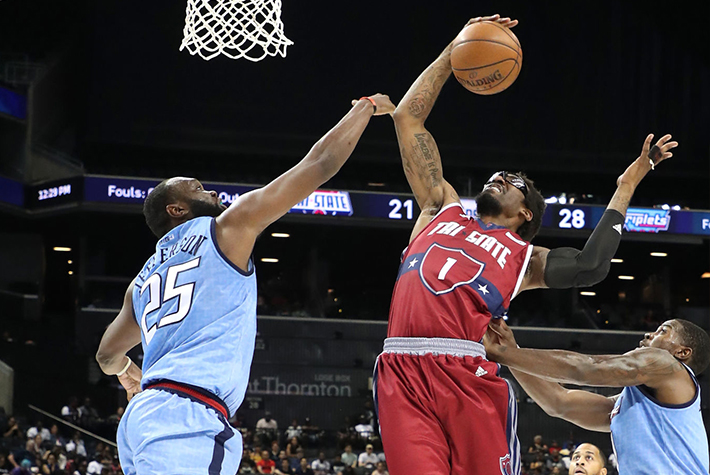 Iso Joe hit back-to-back shots to give the Triplets a four-point advantage. The next possession, Stoudemire tried to take Jefferson. Big Al impeded Stoudemire’s shot, grabbed the ball and followed it up with a hook shot to put the Triplets up six.

Tri-State made a couple of free throws to creep back within four, but Johnson nailed a fade away jumper to increase the Triplets lead back to six points. Jefferson scored the next four buckets for the Triplets with a jump shot just past the free throw line, a pair of hook shots, and a finish inside from a Jannero Pargo assist.

Four points away from victory, Iso Joe sealed the deal with a four-point swish from deep for his third game-winning shot in the first four weeks.

Next weekend, Big Al and the Triplets travel to Kansas City, Missouri to take on the defending BIG3 champions, the Power. The Power, led by Corey Maggette and Glen “Big Baby” Davis, sit right behind the Triplets in the standings with three wins and only one loss. Tip-off is set for Saturday at 3:00 p.m ET at the Sprint Center.